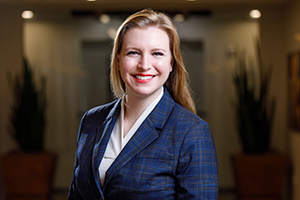 Davia Craumer’s kitchen, constantly stocked with butter, eggs, cream, and sugar, might make you believe her apartment doubles as a French bakery. In reality, she’s simply a firm supporter of good food and an advocate of adding avocado to almost everything (baked goods notwithstanding).

Bringing these diverse areas of law together is the singular notion that people deserve to be treated with respect. The remedies Davia fights for come in a number of forms, including monetary relief, new training programs, and fighting to get her clients’ jobs back.

Before joining The Erlich Law Office, Davia was a member of her college mock trial team. Her coaches, including a civil rights attorney and a public defender, emphasized the importance of using the law to improve the society in which we live, a lesson she carries into practice. As a mock trial team member, she had the opportunity to volunteer for Public Counsel on its Homelessness Prevention Project. After her first year of law school, Davia worked as a Research Assistant for Joseph Page, a professor focusing on torts and products liability. She clerked for The Erlich Law Office during the summer of 2013 before returning to school for her last year.

Davia attended the Georgetown University Law Center, where she earned her J.D. During her time at Georgetown, she served as the Annual Review Editor-in-Chief on the Georgetown Journal of Gender and the Law and acted as a Student Attorney with the DC Law Students in Court clinic, where she advocated for low-income clients in DC Landlord-Tenant court. She also practiced her public speaking skills onstage as the President of the Georgetown Gilbert and Sullivan Society.

How Can We Help?
Practice Areas